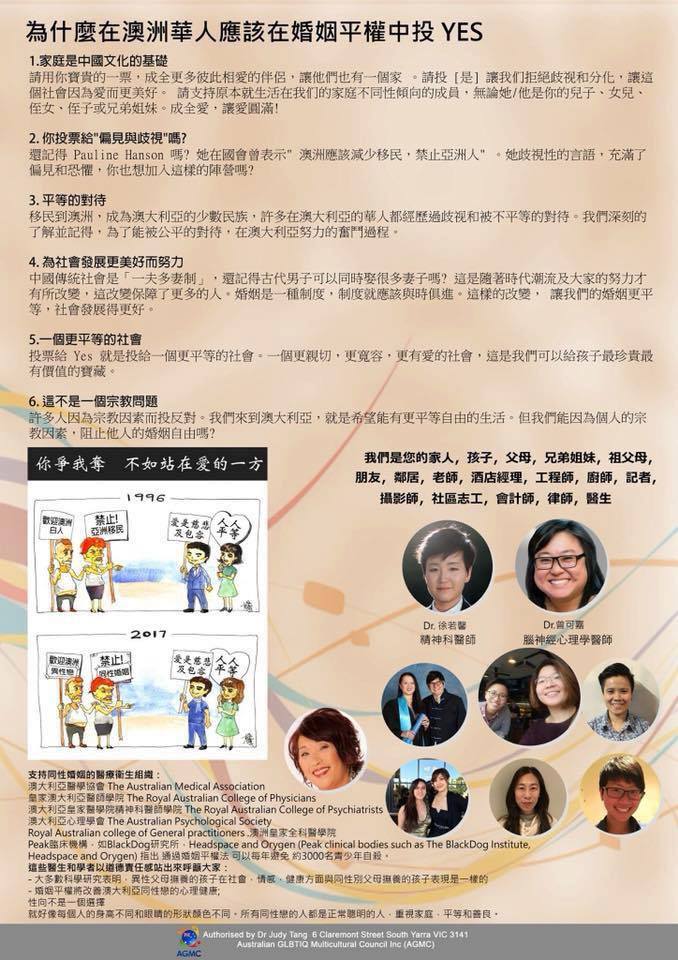 Please share and continue talking about the importance of equality for all people regardless of sexual orientation, race, ethnicity, age, disability etc.

1. Chinese Values Strong Families
The “Yes” vote will allow for our strong Family values to be promoted whilst a “No” vote seeks to discriminate and divide. Remember – LGBTI persons are already a part of the Chinese Community! A vote for Yes will bring us closer as a community.

2. No-Voters are promoting discrimination
Remember Pauline Hanson? A strong supporter of the “no”-vote, in her first speech in parliament stated that Australia was being “swamped by Asians”. Her anti-immigration and anti-multicultural stance is based in fear, prejudice and discrimination. A vote of “NO” validates politicians with Anti-Asian sentiments.

3. The Chinese Community stands against discrimination
As a minority group, many Chinese Australians may have already experienced discriminations themselves in the context of the White Australia policy. We understand and remember that discrimination is often based on misunderstanding, fear, and prejudice. We remember our struggle in Australia to be recognised as equal citizens, the same way that LGBTI persons are struggling now. We should stand up for ALL whom suffer from discrimination, not just ourselves.

4. In Chinese History – the definition of Marriage already previously evolved – and for the better! Remember a time of our grandparents when a man could have many wives? We argue that society evolves for the better: more equality by redefining marriage.

5.Our Children deserve a Equal Society
People who are gay will identify that way regardless of the outcome of this Vote. Most gay people had straight parents. A more EQUAL society is safer for children because they will learn to be kind and tolerant, no matter what their race, gender, sexuality or social background.

6. This Vote is about legal change, separate from religion.
Many No supporters describe religious reasons for voting No. Regardless of our spirituality – many of us came to Australia and enjoy our freedom in this secular democratic country because of the separation of State and Church. We remember examples in Chinese history where influence between religion and government led to the erosion of individual rights.”

Liked it? Take a second to support Ethnic LGBT+ on Patreon!

PFLAG & Ethnic LGBT+
This morning Ethnic LGBT+ had the honour of sitting down with Shelley Argent, National Spokesperson ...
Articles for Ethnic LGBT+ individuals
The literature in Australia remains limited on the experiences of its culturally and linguistically ...
How is the marriage equality debate affecting you as an Ethnic LGBT+ Australian?
There is an unspoken tension between my parents and I in my Indian household as Australia’s postal v...
The Human Dignity Festival 2018 - Hong Kong
Ethnic LGBT+ is proud to be a primary supporter and co-convenor of the Human Dignity Festival 2018. ...
Vyvyen Wong - Cairns LGBTIQ+ Pioneer - My Story
It was a bright, sunny morning along a tropical Queensland Road as I drove from Babinda Boulders to ...
Fearlessness - what does it mean to you?
The theme of Sydney's 2019 Mardi Gras is FEARLESSNESS. I was curious as to what this word meant for ...